I've finally found the time to record the story of Francis' birth.  :) 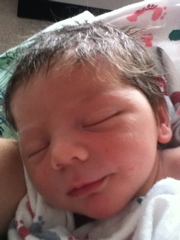 More details:
We arrived at the hospital at about 8am. I definitely was having strong contractions but they were far enough apart that I opted to walk from the parking lot with my husband and daughter instead of being dropped off. I'd called ahead so we were immediately shown to our room. I labored with my daughter for a bit where she stood on the bed and rocked with me. Then my parents arrived to take over care of my daughter. My mom took one look at me and said, "We won't leave the hospital." (She used to work in L&D.) I guess she knew this would be fairly quick.

At 9:30, the contractions were close and very intense. Stronger than I'd ever felt them in the 27 hours of labor with my daughter. The midwife checked me and I was 5 cm dilated. She asked if I wanted a doula. (They have a volunteer program.) I quickly said, "Yes!" (Then wondered if i should have asked my husband first how he felt about it but contractions were very strong and close so there was no time to discuss. And I knew I needed the support. My husband could hold my hand or get me water but he wouldn't know if some new position was good or if that would stall labor. Besides, why not?)

Within a few minutes, the head of the doula program (Anne) came in and explained the doula-on-call was on her way but she'd stay with me until she arrived. That was great. Anne was amazing. She talked me through contractions. She squeezed my hips in some way that was supportive. She encouraged me to relax in between contractions (in between? there were like 5 seconds. lol) and gave me "permission" to have irregular contractions, be in any position that I felt comfortable, be vocal, etc. Not that I couldn't have done those anyway, but it was nice to feel like I was doing it "right" even though I've never gone through anything so intense.

I labored on hands/knees for a while. Then I made the long trek (15 feet or so) to the bathroom. Then I labored standing for a while and the new doula, Michelle, arrived. Both Anne and Michelle stayed with me for a while.

Eventually, I crawled back onto the bed (hands/knees) and started pushing. They called the midwife and told her to put gloves on. She sort of argued that she needed to check me and both the nurse and doula basically said there's no time. Get ready. I confirmed that it was ok to push since I'd heard pushing too early could cause swelling and slow things down. "Yes! If you feel the urge, push!"

Well, I never felt the urge, but pushing made the pain more tolerable so I pushed. With Elaine, I pushed for 4 hours. A little out, a little back. A little out, a little back. With this guy, I felt one move out and then recede back a little and thought, "Oh, no! There's no going back in!" and pushed with everything I had left with no regard for contractions or timing. I was just pushing.

Meanwhile, my husband asked if he could help deliver the baby ("Sure! Go wash your hands.") He did, tweeted "pushing" (at 11:25am) so our family and friends getting the twitter feed would know what was happening, washed his hands again, and then the head was out and he was ready. I declared myself done and everyone started screaming, "No! Keep pushing! Keep pushing!" I didn't know it at the time, but the cord was loosely around his neck. With the next push, I got his shoulders out, the midwife slipped the cord down his body and my husband and midwife caught the baby.


At 11:28am, we had our baby boy. 8lbs 5.9 oz and 20.5 in long. My daughter joined us shortly thereafter followed by the rest of the family. Everyone was happy and healthy! 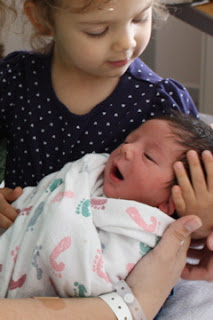 Welcome!
This blog started as place to share my experiences with diapers, ECing and potty learning. It has transitioned away from just personal stories to include some how-to articles, either by request of my readers or information I wish I'd had. It will continue to be partly instructional and partly personal.